whalesharesPosted last year for Everyone to comment on6 min read We are pleased to announce the next update to the Whaleshares blockchain has successfully been implemented. This update is very different from the previous hard forks and is focused on changing the economic model that governs the user activity on Whaleshares and will set the stage for the final core changes coming to the platform as outlined in the founding Whalepaper.

Hard Fork 3 brings major changes to the economics behind the Whaleshares platform in the form of a new Daily Vesting Reward and Adjusted Content Reward. These changes will work with current features such as WhaleTokens, CCTI, and direct rewarding, while also paving the way for new features coming in the next update.

The updated distribution of WLS tokens created by the yearly inflation is as follows:

^ The Content Reward Pool has a starting base of 15%, but will have a varied actual daily % based on spillover of unclaimed WLS from the Daily Vesting Reward Pool.

Daily Vesting Reward
This reward is based on the amount of Whalestake an account has and is calculated in a daily (24 hour) cycle. The Daily Vesting Reward must be claimed each day or it is forfeited and spills over to the Content Reward Pool. Users will now have greater flexibility in how they choose to use and share the returns earned by their stake in the Whaleshares platform.

You have the option to gift a portion (or all) of your Daily Vesting Reward to other accounts using the drop down options in the "optional" section. The reward can be divided up and claimed however you want as long as it is done within the current claim cycle time.

Found a great post you want to reward, but it's already paid out and closed? You now also have the ability to reward your favorite contributors and content creators over and over again from your Daily Reward Pool, even once a day if you'd like, based on all the works they've posted, whenever they've posted it. Simply send them a direct reward gift from your Daily Claim!

Just remember, Vesting Rewards are claimed as Whalestake and all claiming actions are final and cannot be reversed.

Please Note: This is all still done on the front social site requiring only the social (posting) key. Be aware of anyone who may have access to your social key as they will have the ability to gift stake to others using your account. 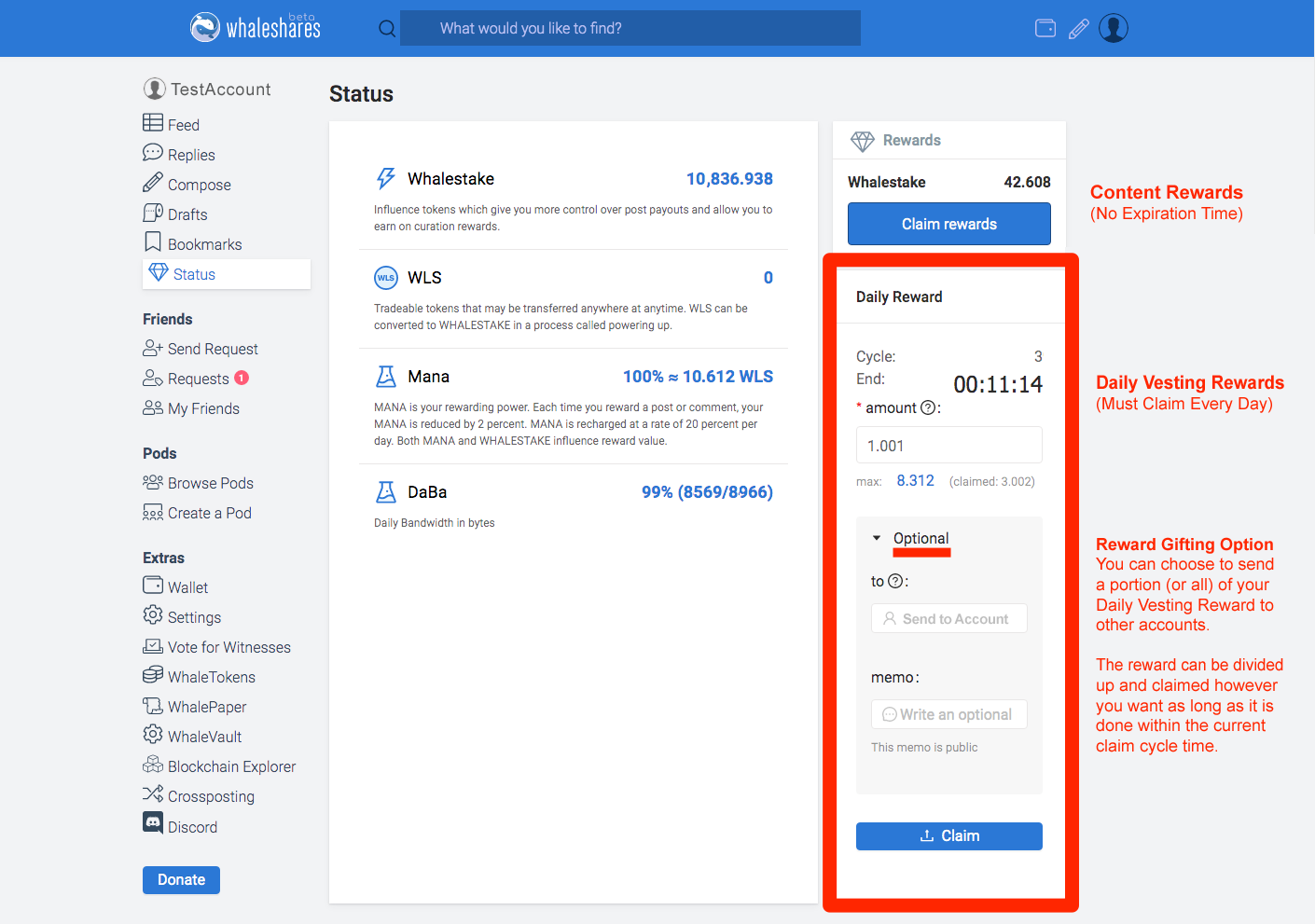 Content Rewards
Rewards earned on posts and comments will continue to accumulate with the current 14 day payout cycle using WLS from the Content Reward Pool. These rewards are not tied to the Daily Vesting Rewards, will not expire, and will remain in your status page until you claim them.

As noted above, the Content Reward Pool has a starting base of 15%, but will have a varied actual daily % based on spillover of unclaimed WLS from the Daily Vesting Reward Pool. This mechanism is in place to redistribute rewards missed by inactive accounts to those of active users on the platform.

!!! Initial Reward Cycles !!!
While the changeover to the new economic model has already taken effect, the Content Reward Pool still contains a large sum of WLS reserves from the original rewards pool. It will take 15 days for the Content Reward Pool to distribute the funds and stabilize at its new base level. This reduction will show as a slow decrease in your account's MANA rewarding power.

Vesting Reward Cycle o was a half cycle based on the block number of HF3, Cycle 1 will be the first true 24 hour "daily" cycle and will reflect your actual daily reward amount.

Updates to WhaleTokens and CCTI Rewards

A new system has been created to manage the WhaleToken and CCTI Rewards programs on Whaleshares. These services will change over to use the new Daily Vesting Rewards earned by the token accounts to directly reward active token users using the built-in daily claim functionality.

Using the new Daily Vesting Reward system, WhaleToken owners have the ability to fully customize their token rewards. Whaletoken owners will be able to set the % of their Daily Vesting Reward they want to allocate to the connected token, choose the method for distributing rewards, and have the option to include a standard reward/share on posts. Token use will be a direct action that rewards the token users by gifting the token rewards as Whalestake the next day, with the possibility of also including a standard reward/share to a specific post if the WhaleToken owner has enabled that option.

With this change, ALL WhaleTokens (both EOS and legacy BTS versions) should only be used once per day per account per token.

Since these services require the hard fork changes to be in place to test them, it will take a day or two to work out any last issues and finalize the new system. More information on the specific reward details ans usage of the WhaleToken and CCTI programs will be posted in the coming days.

A new tool has been added to the wallet making it super easy to create new accounts for friends and family members with just a few steps. The account creator pays the account creation fee and the account is created instantly, no email or other verification is needed. 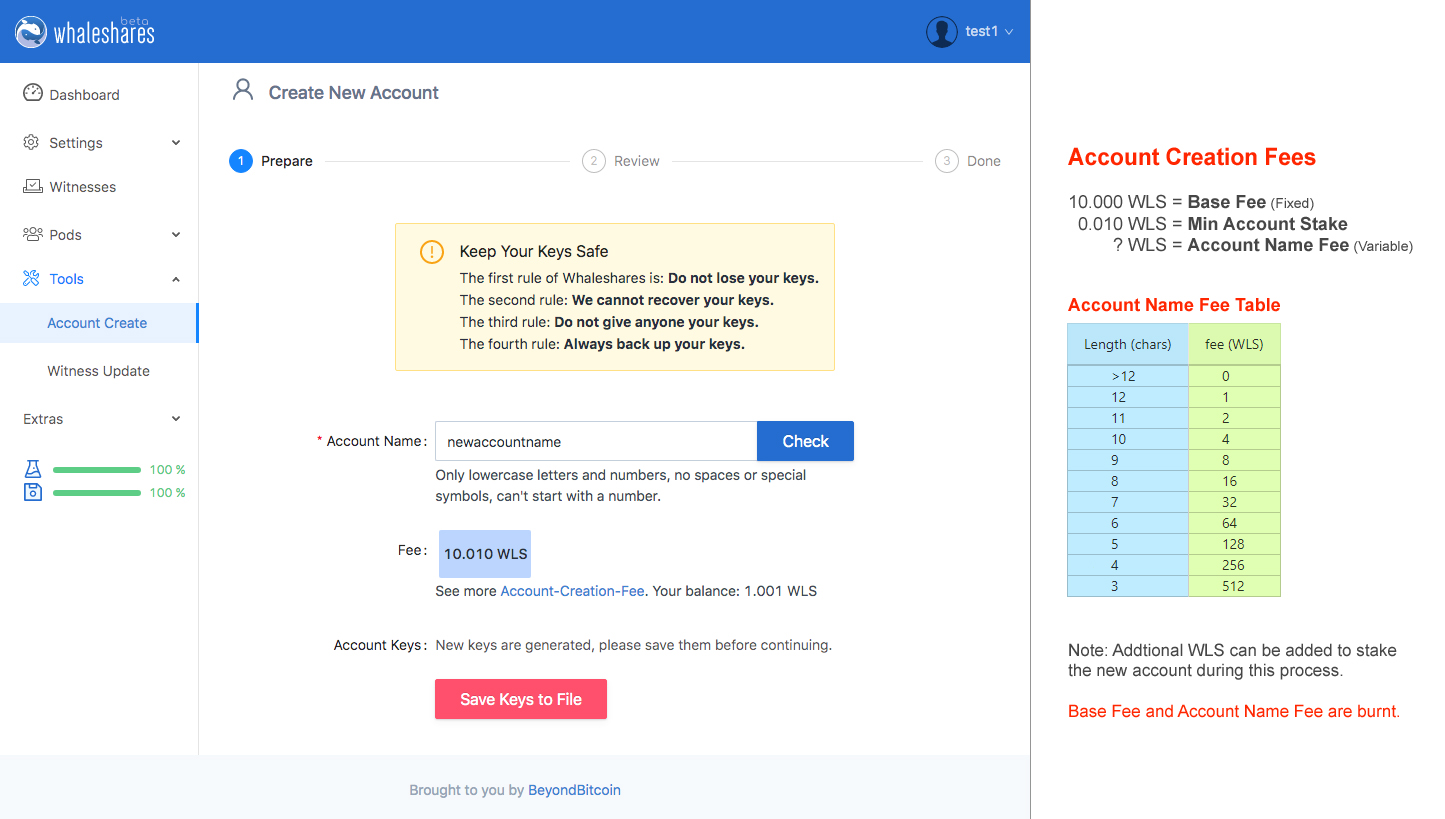 We encourage everyone to Read the Whalepaper for a thorough understanding of the vision and goals we have set for the Whaleshares platform.

Please keep in mind Whaleshares is still in BETA, and while this update brings us even closer to the end goal, we're not there quite yet. With the long-term view in mind, Whaleshares is being designed and built to function as fair as possible, to as wide of a user base as possible, as the platform begins to mature and moves out of its high inflation, early-adopter phase.

Development is currently underway on the next version release which will bring together the final core changes, new features, and use-case tools intended to set the new standard for cryptocurrency-backed social media platforms.

The door is always open,
come join us anytime!

Stay tuned for more official announcements on the way.
https://discord.gg/3pqBXKY

whalesharesupdatehf3
36
Sign Up to join this conversation, or to start a topic of your own.
Your opinion is celebrated and welcomed, not banned or censored!