svinsentPosted for Everyone to comment on, 2 months ago2 min read

Hello, my friends!
New story of a pig Svinni. Once Svinni traveled to a beautiful, distant country across the sea. And there was such a saline lake with birds. With such beautiful pink birds named flamingos. By the way, it was a real saline lake, where local craftsmen mined salt. Everything is fair!
The flamingos could be reached on foot, but there are only 2-3 kilometers. Or you can take a carriage with a stinking horse, but for a fee. But if desired, it was possible to get there in a retro car, but also for money. Guess which option the tight-fisted piglet chose?
Svinni loves to walk and he went on foot. Flamingos grazed in the middle of the salt marsh, gnawing some krill there and sunbathing, shimmering with pink feathers in the sun. And one could get to them only through a large grassy meadow. Who knew that this whole clearing was mined ?! Small dry sharp thorns literally dug into the paws and very upset. A little later, Svinni found out the source of their origin by typing, but at first it was not easy. They were such small dry plants with thorns instead of flowers. Very mean! Even sandals didn't help! But the piglet heroically overcame the obstacle course and got to the pink flamingos.
Pig went out on the sand to the water. Alas, the birds were shy and did not let anyone get too close. The slightest rustle and birds immediately flapped their wings and flew away! So the piglet had to take pictures of them from afar. What a pleasure! Pink spots in the distance!
And then a cart with a horse drove into the lake spit. The cart was carrying rich tourists, greedy for other people's birds. As a result, all the birds were scared and the flamingos flew away.
Oh, okay! We have a sea, a swimming pool, e-books and lunch there according to the plan! 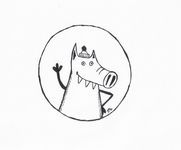