profanereviewsPosted for Everyone to comment on, 2 years ago8 min read We got home yesterday and Blue was really excited to see us so he jumped around and played on the bed with quite a bit of piss and vinegar in him.

Today he was not so enthusiastic. He has really been slowing down as of late, and it has been really hard to watch. It seems like it was just last year that he was running through the woods chasing rabbits and ghosts of deer back in Ontario but we've been out here for almost six years now so that can't be true.

I remember the day we got him and how happy we were with his carefree attitude and how he seemed autistic when we would pet him. It was like he wouldn't look us in the eye but as soon as you weren't petting him he was sideways pressing his head into your hand while looking, dead-eyed, straight ahead.

Sure he came with a lot of emotional baggage, but don't we all? He needed an understanding family and we needed him so it worked out in everybody's favour. Now he is having a hard time just getting out of bed and doesn't even need a leash to go for a walk because I can walk faster than he can run and he just doesn't have the energy in him to bolt.

So needless to say, I spent a lot of the day feeling sorry for myself because it's only just a matter of time and other than my wife, he's the best friend I have ever had.

Well, it has gotten much worse. We spent the night sleeping beside Blue and thought he was going to die. I slept with my hand on him in case he stirred in the night and needed to go for a pee. I have to carry him now because he can't walk on his own anymore. Things took a really bad turn and he won't eat but drinks a ton of water. When I would carry him outside and set him down he would pee and then try to drag himself under the deck. It's -14C and I know he wouldn't last an hour in the shape he's in. He did get under there once and I had to open the car door to fool him into thinking we were going for a ride. He came out so we took him for a ride anyhow. It's his favourite thing so if he is going to die, at least he got a last ride.

Most of the day and last night was spent crying and talking about all of the great, and not so great, things we had been through with him since May 2012 when we first got him. We laughed about how he learned to climb the stepladder that we kept in the kitchen so he could lick the butter. All of the times he would get into the garbage and the way he loved to take his favourite garbage into his crate and hide it in his blankets. This was mostly yogurt containers and coffee cups but occasionally there would be some sort of rind. All in all, it was very endearing to us that he had these little quirks.

I woke Blue up this morning and he was wagging his tail and was able to slowly get out of bed and walk to the door. I still had to carry him up and down stairs but at least he was feeling better. His breathing is still slow and ragged but he was being a tough boy, like all of the other times we thought he would surely die and he fooled us.

The one time we took him and Dover to Bullhead Mountain for the day and we stopped at a gravel pit halfway up to have a fire and some lunch. The wind started picking up and then Blue all of a sudden caught a scent and took off into the woods. We looked for hours and then went home to get the mattress and go back out for the night and wait for him. It was so windy we couldn't hear anything but we waited there for him until morning.

When he still didn't show up we went home and got the quad and started patrolling all of the logging road and cut blocks on the mountainside. We had left his bed at the gravel pit and checked it before we went home that night but he still wasn't there. That's eighteen hours of searching and no dog. We figured he got killed by a cougar or something but left the bed there, just in case.

Later that night we got a call from a local bear hunter. He found Blue on a bed in the gravel pit and he was pretty hurt. He couldn't walk and was very sore. We went and picked him up and he was in pretty bad shape but wasn't cut or punctured, probably just kicked around by a deer or elk.

After that trip we called him Sidewinder because his back legs never really worked the same and he would kind of dogtrack when he ran.

Well, he is feeling way better today. He woke us up in the morning and trotted to the door to be let out. We went for a short walk and he was excited and even ate a handful of kibble I took in my pocket. For some reason he wouldn't eat any out of his bowl though. We switched him back to kibble a month or so ago because he didn't seem to want the raw food anymore and we figured this would be better for his teeth. We got him a bag of high quality chicken and oatmeal food and he loved it.

We had some hot chicken sandwiches for supper and I stirred some of the leftover chicken and gravy into his kibble. That did the trick. He gobbled it all up. Well, at least he ate something.

I am thinking that he has figured out that we will give him tasty human food if he doesn't eat his kibble. I thought it was because we switched it from chicken to lamb and oatmeal but after going to get another bag of chicken, it didn't matter. We had two five pound tubes of raw food left in the freezer so I thawed one out to try that but he wouldn't even taste it. WTF?

This is bullshit! Now the only way he'll eat his food is if I give it to him as treats on a walk. He will eat his whole dinner out of my hand as long as we are out walking. I am now wondering if this was all a ruse because he thinks I'm too fat and didn't know how to tell me. Anyhow we're getting out for walks and he doesn't even need a leash so it works out for both of us.

He has started failing again, here and there. Can't get on the couch, confused, etc... We went for a walk and he made it across the street and into the store parking lot but that was it. He started to lay down and I knew we had to get home. He wouldn't eat anything, even out of my hand.

He was in not bad spirits this morning so we took him for a car ride to Chetwynd. He slept most of the way but after his mom put the towel over the console he was allowed to co-pilot for a little while. 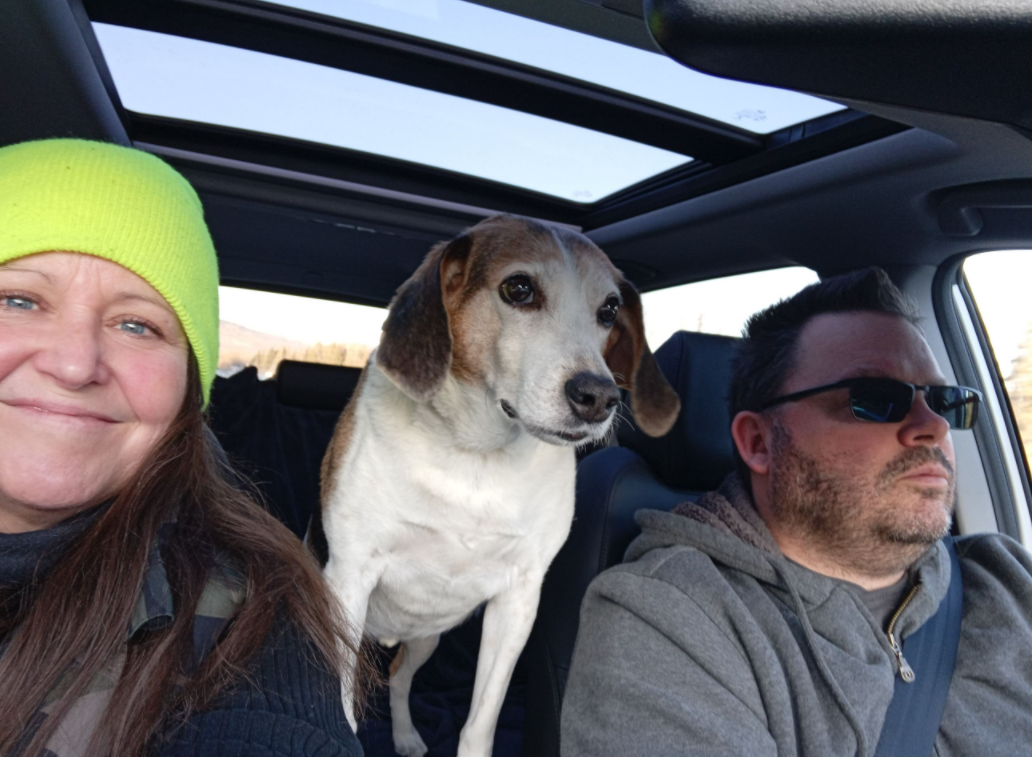 It took his energy for the day and he's been sleeping for five hours since we got home but it was worth it to give him the joy of a car ride. I don't know what it is about it but he just loves being in a vehicle. Even if it's just parked in the driveway. I think he figures that he can't get left behind if he just stays there.

Anyhow, as much as it pains us, we are coming to grips with the inevitable and bracing ourselves for a life without him. It will be hard but as we all know, life doesn't revolve around dogs.

Cats on the other hand...

Are you looking for an alternative to Facebook and other social media sites that censor you and own your data? Check out whaleshares.io and find out what it's like to own your own content and get rewarded with cryptocurrency for it. There are always people around to help and I'm one of them. Check out their Discord and see what it's all about.