Going To Build A Garden

profanereviewsPosted for Friends to comment on, 2 years ago6 min read

We have been planting everything in containers and crates we have found at the dump or acquired over the years. We had three small raised beds, but they weren't really working as well as we had hoped so we pulled them out.

Now we needed something to put in their spot but we didn't want to spend a bunch of money.

Luckily we live in an area of abundance. This is Geddes Bay. There's a lot of free logs here.

So we hooked on to our little trailer and headed for the lake. It was hot. That was enough work for the day.

We didn't want to overload it, so we took what we figured we would need for an 8'x4' garden bed. 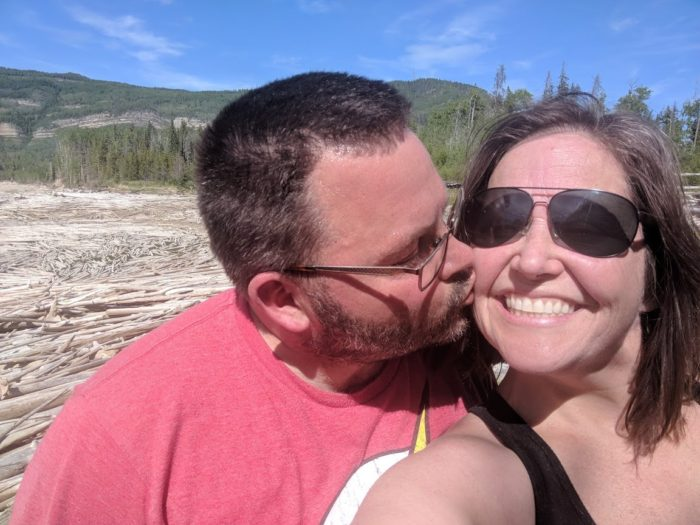 My helper required payment for services rendered.
Luckily she wasn't charging more than I could afford.

We were planning on doing some stone beds, but the sheer amount of work was daunting. This provided a free chance to try something that would take a lot less time and effort, but mostly it doesn't require much skill.

I have never worked with stone before and Gerri would like to get some beds in this summer, so it looks like we will be starting with wood.

I figure we can get enough for an 8x4 bed every trip to the bay, so we may get another two or three beds in this summer. It's somewhere we enjoy going, just to hang out, so now we can feel productive at the same time.

All winter I was dreaming of building some river rock, raised- bed gardens in the backyard. I had everything planned out in my head and had read many articles on mortars and techniques in preparation for when the snow disappeared.

We were going to have a mixture of reclaimed logs and stones to try and keep everything natural looking.

For now, we are going to work with the logs. They are free and doable. As usual, I forget to take photos when I'm doing things, so I rely on Gerri to document our progress. I don't think I even took a "before" picture. Luckily she showed up before I finished, or it would just be me trying to describe the process to you. I suppose I found the stonework daunting, more than expensive. It's hard to admit that, mostly to myself, but there it is. I kept saying that I was going to buy cement and mix it up for the footings, but I never did it. There was always something else that the money was needed for. The rock is free, but when I started to think about building the wall, and the sheer weight of the rock I would be wheelbarrowing into the backyard, I sort of froze up. Mentally and emotionally. I can't think of anyone I would rather be beside when I'm feeling down or inadequate. Even just having her near me gives me everything I need to keep going. I love when she comes out and tells me to wait, just so she can take a selfie of us, or asks why I'm doing something a certain way.

Sometimes it's just nice to take a break, put my arm around her and stare at the tomatoes while we cool down and talk about things we would like to do if we had the money. It's never anything grandiose or even expensive. It's simple stuff, like a rock waterfall and a little fish pond or to replace our dilapidated sheds. A little piece of property and a sawmill.

We really don't want much. We talk about how nice it would be if we could use the property behind us to plant some gardens in. It gets excellent sun and under all that grass is a gravel parking lot. It used to be a theatre but now sits empty, except for a room upstairs that the cable company uses to broadcast it's twenty-six channels from.

Don't tell them, but I cut down a big poplar on their property last year that was full of carpenter ants. I didn't know about the ants until it hit the ground. The real reason I cut it down was that it was blocking all of our sun. We threw the branches and limbs in this garden as sort of a hugelkultur garden. We also threw in our old compost pile. It wasn't completely broken down but mostly. Just like us.

It was filled with kitchen scraps, old chicken bedding and last year's tomato plants, along with an uncommon amount of ants. I was thinking about how to safely poison all those ants but then I thought better of it. They really weren't hurting anything, and possibly were helping break things down. I did take a few particularly infested clumps and threw them in with the chickens.

Circle of life and all that. We mixed in 4 loads of wood chips to the mix and then got ourselves prepared for shovelling the trailer load of manure into wheelbarrows and moving them to the backyard and into the new garden.

That was when I had an idea!

You know, I never thought I'd make it to forty, but here I am at forty-six and I feel like my life has just started. I finally feel like I have a goal, and I also have someone to strive for that goal with.

It took me a long time to find someone who appreciates the simple things in life. A crackling fire and some smores, pruning some tomatoes, or just getting high in her fort and dancing. She's so much more than I had ever hoped for, yet feels like she's sometimes not enough.

Even though she's the reason I even want to do anything. The reason this got built, and anything after it. I've finally found someone who appreciates old, weathered wood and realizes that rich soil is one of the most valuable things that we can have in our lives.

With rich soil, you can grow anything.

gardeningreducereuserecycletruelovehomesteadingdiy
168 WLS
13 Shares18
Sign Up to join this conversation, or to start a topic of your own.
Your opinion is celebrated and welcomed, not banned or censored!