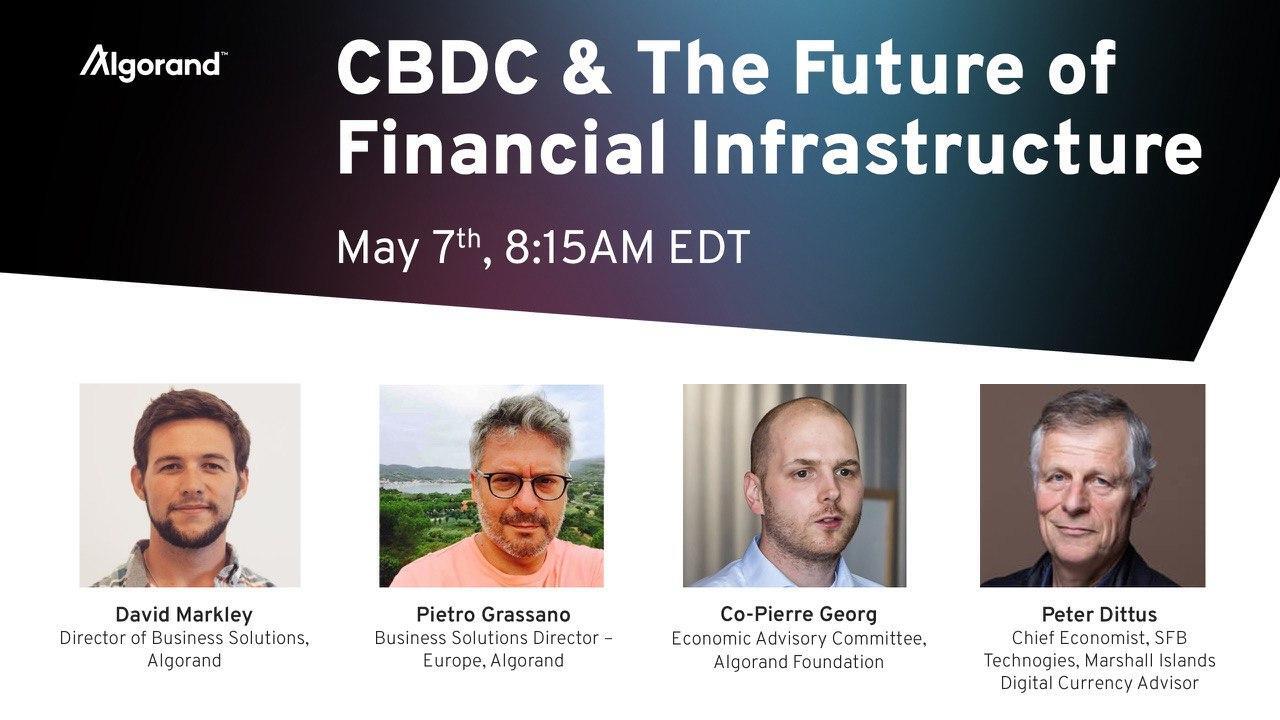 The purpose of the Q&A was to discuss CBDC and how their adoption could shape the financial infrastructure globally. The Algorand blockchain is a leading pure proof-of-stake protocol that supports various blockchain uses cases such as borderless financial system and decentralised identities among others. Recently, the Marshall Islands announced plans to launch its CBDC on the Algorand blockchain. The Q&A provided an opportunity to understand CBDCs and how the Algorand blockchain provides the perfect opportunity for that. The Q&A was hosted by the Mark Markley, Director of Business Development at Algorand, and the expert panel included the following

The panel discussion began with an introduction of the concept of CBDC and why Central Banks are realising the potential of blockchain to facilitate this. In summary, Central Bank Digital Currency (CBDC) is a virtual national currency that is issued by Central and Federal banks of governments as a legal tender. A CBDC is virtual and allows instant exchange and transfers to third parties without using intermediaries such as the commercial banks. The work in the form e-money that has the legal backing of the Central bank and can be spent via digital wallets. Unlike unregulated cryptocurrencies, CBDCs are regulated. The technical infrastructural setup and deployment of CBDCs differ from one country to the other. While some CBDCs are deployed on a central database, other countries are leveraging blockchain technologies and infrastructure for this purpose.

Pietro observed that close 70% of banks are evaluating CBDCs with different models. Sweden, Cambodia islands, Marshall Islands, China are among some of the countries with plans far advanced to launch a CBDC. Blockchain provides a compromise between the privacy of CDBC and the security of it. It makes it possible for central banks to maintain transaction privacy and transparency in a secure environment. For the first time, blockchain is witnessing broader use cases beyond cryptocurrencies and the adoption by Central Banks is welcome news.

CBDC Operational strategies and reasons for deploying it

Deploying CBDCs comes with the benefit of cost reduction and efficiency. One panellist remarked that it can solve the current net settlement huddle which takes time and resources. Also, it is relatively easier to deploy CBDCs, especially when done on using blockchain technologies such as Algorand. There is a lower development cost since the infrastructure is already in place. One point that the panellist touched one, which is something I strongly believe, is the fact that CBDCs can lead to financial inclusion for emerging markets. It opens everyone to easily own digital currencies and avoid the complex limitations that the current banking system pose. People do not need to travel long distances to acquire or process financial services. They can process it from the comfort of their homes. Lastly, it creates a form of financial sovereignty for smaller islands who want to overcome the global financial pressure, especially in the international capital market. Having a CBDC can easily allow countries to build regulated and interoperable systems that work with cryptocurrencies in the long run.

Why is the Marshall Islands creating a CBDC?

The Marshall Islands is a small country that imports more than it exports; meaning that there is a lot of pressure on its national reserve and foreign exchange demands. By creating a CBDC, it allows the country to reduce the transaction cost associated with cash as well as minting money to support the economy. As a welfare and sharing economy, it allows a fair and equitable way to distribute income and other welfare benefits to currency holders. Citizens hold and back the currency and in return, earn some basic income from it. The country can also target poorer citizens by supporting them with basic income payments using digital currencies. It is also safe and convenient to use CDBC as it reduces the theft and risk involved in handling physical cash. Generally, it was noted that as the digital economy grows, the need for CBDCs will rise.

The question here was why did the Marshall Islands choose to deploy their CBDC on the Algorand chain? In answering this, Peter noted that the Algorand chain is suited for the financial sector as well as creating digital assets. Here, the Algorand Standard Assets and the Atomic Transfers features of Algorand came out as strong reasons. Algorand’s layer-1 features mean that it can support the needs of a CBDC. Also, the Marshall Island wants to create an open ecosystem where everyone can participate and benefit from it. The robustness of the Algorand chain means that it can minimize counterpart risks by making use of the layer-1 smart contract features which guarantees a trustless asset exchange and transfers. Lastly, Algorand uses the pure proof-of-work governance protocol which selects validators to run nodes and validate transactions. This is environmentally friendly and saves the energy required in running million of nodes competing to validate transactions. This is something the Marshall Islands team find as a positive.

Usability and adoption of CBDCs

As we were winding down on the discussion, a participant asked about the usability and adoption challenges of CBDCs by the populace. The panellist proffered varied ways and reasons we can overcome this. First, the adoption of new technologies is quicker among certain demographics like the millennials. Governments could begin with this segment of the population. However, since CBDCs have the support of governments, startups and enterprises can build innovations that can lower the adoption curve. In doing so, startups need to empathise with the traditional financial system and interface with them instead of attempting to replace them. Second, a good number of people in emerging markets may still not be using smartphones. CBDC adoption strategies should include simple payment platforms that work with feature phones (internet-free phones) or even solutions that do not require phones.

Is CBDC a threat to legacy financial systems?

On this, the panellist rather sees CBDC as complementary to the current legacy financial system. It will ease inter-bank settlements and reduce the cost of handling cash. It also has the potential to delink the bond market from the financial system. This will ease the pressure on commercial banks to fund domestic bonds by allowing the government to borrow on based on its CBDC.