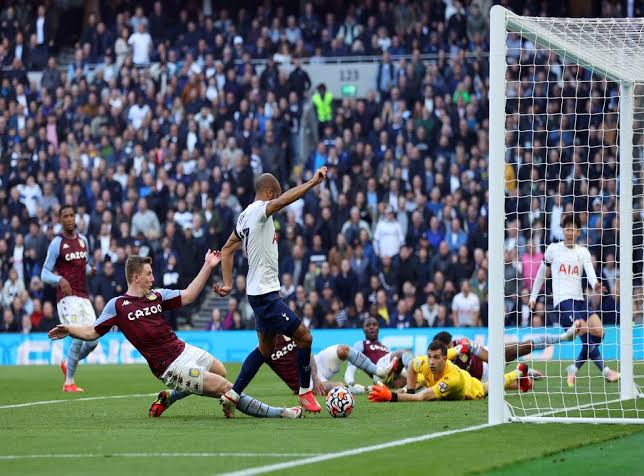 Tottenham hosted Aston Villa in a must-win match for them after struggling for form recently which has cast doubts on the ability of Nuno's coaching credentials. Aston Villa still fresh from their exploit in defeating Manchester United with a solitary goal would have hoped for something better in this game but it was not to be.

Son had to be at his best to provide two assists to give his side the win of the game after Hojbjerg scored before Watkins restored parity and Targett's own goal gave Tottenham the win they desperately sought for. It would be a relief for Nuno as he got the 3 points after the comprehensive thrashing at the hands of Arsenal in the derby.

Hojbjerg and Son brilliantly combined in the 27th minute after Hojbjerg found Son before Son held his cool, held the ball and fed Hojbjerg back just outside the box. The midfielder wasted no time in finding the bottom right corner of the net to give Tottenham the lead they desperately sought to appease the fans who endured the thorough thrashing at the hands of Arsenal last month.

Aston Villa drew inspiration from their match against Manchester United and in the 67th minute, Danny Ings found Targett just at the edge of the box and his brilliant low drive ball into the box was bundled home by Ollie Watkins to draw Aston Villa level.

Aston Villa would be hoping to hold on to the lead but it slipped just 4 minutes after Son was sent through on the side of the pitch. He brilliantly and unselfishly squared the ball into the box with the hope of finding Lucas Moura but Targett got there first and bundled the ball into the back of the net for an own goal. The provider for Villa's goal turned to score but this time around, into his own net.

Tyron Mings defended with his life shortly after when Son found Kane just outside the box and his cut-back pass found Le Celso who tried to stroke the ball into the empty net but Mings was there to provide a last-ditch effort and bundled it away for the corner kick despite beating the goalkeeper.