Whaleshares is more about engagement than any else.

A Night To Remember For The Boys.

olawaliumPosted for Everyone to comment on, 5 days ago4 min read 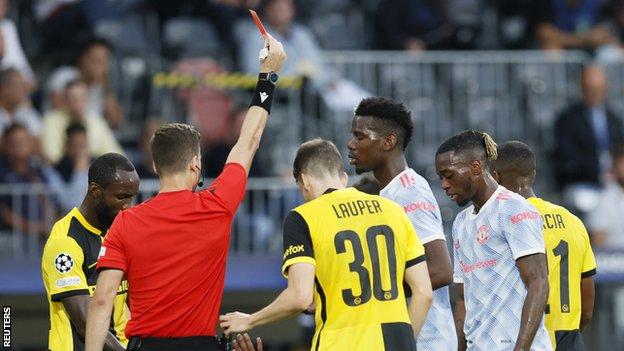 What a game to remember for the Young Boys as they played against Manchester United on their home turf and they won. It was never a script that can be written because, on paper, everyone expected Manchester United to win this, especially with Ronaldo now in their ranks.

Ronaldo did his job despite the underwhelming performance the whole team gave and credit to Young Boys for making Manchester United look ordinary. The game was further complicated after a clumsy challenge from Aaron Wan Bissaka and the referee had no choice but to send him off.

Ronaldo gave United the early lead and it looked like United would nick it but the home team found their way back into the game and just when the game was heading for a draw, Lingard's wayward back pass was pounced on and converted to create an amazing scene for the home fans. A lot was said regarding the tactics and substitutions of Ole Gunnar Solskjaer but this was a defeat well deserved and credit to the home team with their fans cheering them on till the last kick of the game.

United should have been behind as early as the 12th minute after Elia flashed the ball across the face of United's goal but he was unlucky to have no one there to connect with the ball. A minute after, Bruno Fernandes' outside the foot ball located Ronaldo who tucked the ball home in-between the legs of the goalkeeper to give United the lead.

The home team were all over United and De Gea produced a stunning save in the 24th minute to deny Christian Fassnacht. A counter ensued from their miss as Ronaldo had a decent shot at the other end but the goalkeeper denied him from his near post.

Young Boys threw everything at United and it was only a matter of time as the goals were being sensed but United kept their shape at the back to deny them and most notably, De Gea. It got worse for United after Wan Bissaka was given a straight red card for a clumsy challenge on Martin's Pereira. Sancho was taken off immediately to be replaced by Diogo Dalot.

At halftime, Van De Beek was taken off and Varane was introduced into the frame of things to absorb the pressure from the home team but it backfired as United had nothing going forward as they were shaped to defend. That shape saw United and Fernandes also taken off at some point to accommodate a more defensive style.

United had a penalty appeal waved off after Ronaldo was brought down inside the box in the 53rd minute. A long ball found him and he raced on goal but the referee felt the fall was too soft and no penalty was given. United got pegged back in the 66th minute after Elia's found Moumi Ngamaleu in the box and all he had to do was poke the ball home after displacing Varane.

Varane stopped another potential threat into the box for United just as De Gea produced a wonderful fingertip save after a long-range strike from Lauper. The game was destined for a draw but the moment of shock to United fans and moment of joy for the home fans came in the 95th minute when Lingard gave a back pass and Jordan Siebatcheu pounced on it and scored. The stadium went wild and no one can say they didn't deserve it.

They played United from start to finish and dominated in every department; shots on target, possession and attempts on goal. Young Boys showed bravery and they got rewarded for it. United would have to go back to the drawing board even though they are still the favourite to qualify from the group stage. The earlier they start racking up the points, the better and easier it would be for them.

Congratulations to the Boys.