You can trade WLS on Ionomy and Hive-Engine.

iamthegrayPosted for Everyone to comment on, 4 years ago3 min read 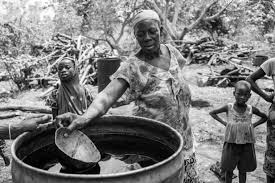 In a far away land on the eastern shore of Nigerian was Ma Oma, the largest palm oil seller in the region.

Ma Oma was a wealthy women who had many people working for her. She supplied kings and chief with the best palm oil money could buy. She also gave to the poor and those around her. She was rich, famous and generous. Yet, she wasn't happy.

Ma Oma of all things, wished to have a daughter. A daughter with whom she could laugh with and share my thoughts. She wanted someone to call her own. Someone she could pass her business to.

One day, Ma Oma purchased five calabashs of palm oil from a new farmer and dropped them in the house. After she had left for the market, something unprecedented happened. Oil from largest calabash poured out and formed into a beautiful young girl. The girl opened her mouth and began to sing

Oil from the other four calabash poured out and became four beautiful maidens. They swept the house, fetched firewood and wash the dishes. Ma Oma returned home surprised. She asked around but no one had seen anyone going to her house.

This repeated for two more days. On the fourth day, Ma Oma hid behind a shed. She needed to see who was doing her house chores. Oil flowed again from the large calabash and the beautiful girl emerged. She sang her song

Ma Oma jumped out and grabbed the girl. She begged her to stay with her as her daughter. The young girl looked beyond the desperation in Ma Oma's eyes and saw love and kindness. She decided to stay. She however warned Ma Oma that she must never near fire as that would kill her.

The young girl told Ma Oma to go the stream the following morning and she would find a baby girl. Ma Oma did what she was told and she became a mother.

Many years passed and the baby had become a teenager. Ma Oma named her Nnu Ego (worth more than twenty bags of cowries). She showered love and affection on Ego. She bought her gifts all time.

Ochuole, Ma Oma's housemaid became jealous and angry. She was jealous because Ma Oma always bought beautiful gifts for Ego and jealous because Ego never did any of the house chores.

One day, Ochuole dragged Ego to the kitchen and demanded she made the evening meal. Ego tried to resist her but failed. By the time she neared the fireplace, she was already melting. Ochuole watched as Ego melted into palm oil before her eyes. She ran away afterwards

Ma Oma returned to find her daughter in a pool of palm oil. She cried and cried. She was inconsolable. She spent the rest of her life by the stream waiting for the palm oil girl to return

storyrevuehfictionfolkwaysscribbleguild
58 WLS
7
Sign Up to join this conversation, or to start a topic of your own.
Your opinion is celebrated and welcomed, not banned or censored!