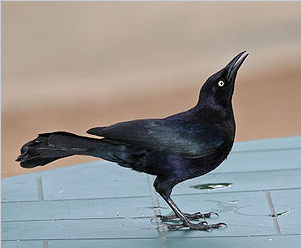 This bird is called a Grackle, here in Honduras and in other Spanish speaking countries it is called a Zanate, the male is bigger and is a shiny black color, the females is a duller black and is smaller. These birds are kind of mean, I have seen them attacking other birds, dogs and cats, and yesterday humans.

See yesterday was my out day, my ID ends in seven and yesterday was my day for going out shopping so I went to Walmart, when I was about 100 meters from the gate, on the corner of the street I saw a small bird on the sidewalk, must have been born not too long ago, it barely had feathers and of course couldn't fly.

Well there was nothing I could do so I just walked past it, then when I was halfway crossing the street I felt something hit my head, lucky I was wearing a cap, it was a male grackle, and after that about three females made passes at my head, and they didn't stop until I started waving at them like crazy, which is what the people who saw me must have thought I was.

I walked on went into the supermarket made my purchases and walked out, and you know they started attacking me again. Now that surprised me I didn't expect birds to be that smart, but now I could do nothing because both my hands were loaded. I walked to the corner and that little bird was still there, once I passed it I was chased to my house, about a block and a half away by four female grackles.

I had no idea of what happened so I turned to Wikipedia and it said that grackles are known to attack humans when they think there nests are in danger. Well there was no nest and it was not only the parents who attacked me because there were at least four females. And how did they recognize me when I was coming back from Walmart?

And the epilogue is today I took the same route and a female again attacked me, I don't know if she recognized me from the previous day or if I have some smell or look that is unpopular with grackles. Now that I remember a couple of years ago I was also attacked by a female, I guess they just see me as their natural enemy.