Incognito - By the Numbers

bushkill-witnessPosted for Everyone to comment on, 3 years ago8 min read Shortly after mainnet launch I posted my thoughts (Incognito Mainnet Launch) on the launch and the perception issues that it brought forth. Although not much has change on the perception front there seems to be a fair amount of people looking for more details on statistics of the platform. So I thought I would take a shot at pulling what information is available into a more comprehensive form. Getting details for statistical purposes seems to be a challenge at times so I have referenced what details I could and will provide rationale of any assumptions I have made. I have referenced the whitepaper1, but have tried to verify with the Incognito team anything from there as I have been informed2 that it is no longer accurate and not being updated.
For this exercise I will be using Epoch 388 since it is the most recent completed epoch when I started this post.

This one is a little tricky and I have had to make some assumptions. It is unclear where the Incognito 5M pre-mined PRV resides6. I assume it is being partially used to fund the staking pool as there has not been enough PRV rewards to support the staking of all the nodes.

We do know that only physical nodes purchased from Incognito can use the staking pool and that virtual nodes require staking PRV from rewards or Test Net pre-mined3. Although no physical node sales numbers have been provide, they have shipped 300+7 so that is the best information I have. 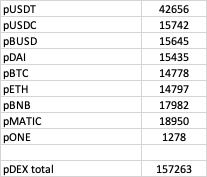 I assume that none of the pre-mined 5M6 is being used as part of the PDEX pool since that would put in into circulation. Therefore it is being funded with the rewards from both the community virtual node (physical nodes have not been able to withdraw rewards until recently?) and Incognito team rewards. Incognito team rewards must also be being sold to community for staking virtual nodes (or they are staking their own "community" nodes) since Test Net pre-mined and community rewards total less than half of virtual nodes staking.

Another question that is often asked is about the earnings and potential for the future.

At main launch the number of community virtual nodes was (500/16)7 = 31. Since this was less than the 80 substitutable positions each should have earned 10.92 PRV per epoch. This also means that Incognito team was picking up the other 49 positions (and reward). We also don't know how many nodes Incognito team has running in the substitutable (community) pool.

As of this morning it looked like there were 334 in COMMITTEE CANDIDATES FOR THE NEXT SHARD and 64 in SELECTED CANDIDATES. With the current 80 validators in current shard that gives us a total of ~ 478 nodes vying for the 80 substitutable positions. Or an average earning of 1.83 PRV per epoch.

We know many physical nodes are having issues getting online but it seems with the latest updates more and more are starting to work. So shortly we should be close to the 860 nodes vying for the 80 substitutable spots which would give an average earning of 1.02 PRV per epoch. I have also seen numbers mentioned of now being close to 1000 nodes now.

Although no promise can be made for the earnings of a node, the Incognito website indicates a $25 per month earnings is a reasonable expectation.

With 1000 nodes the average PRV earned per month would be 157 PRV. To earn $25 a month per node PRV price needs to average to $0.16. Although PRV price has recently been slowing dropping it is currently well above this price. Currently 1 PRV = $0.38 pUSDT.

We have seen ~1000 nodes join in the first 2 months and their goal is to have 32K+ nodes post 1 year4. Let's take a conservative approach and say node growth remains the same (500 nodes/month) for the next 4 months. That will bring a total or 3000 community nodes at 6 months which would bring an averaged earned PRV per node per month of 52 PRV. To earn $25 a month per node PRV price needs to average to $0.48.

There are also plans to increase the number of shards and validators per shard, however, the rewards per epoch remain the same. This does not affect the calculations, it just means a node will be potentially earning less PRV more often. Although there has been no explicit mention of ending the fix beacon validators I am assuming that will also occur as part of the March "gradual" release. This means ALL epoch rewards will be available to community nodes.

My intent was not to draw any conclusions, but rather present the hard data to inform the community. May they draw their own conclusions if they choose to. I have tried my best to make honest and reasonable assumptions. I welcome input from others and especially @incognito if I have erred in anyway so that I can make corrections if necessary. I think we all would appreciate any additional information that the incognito team could share so that future efforts to determine statistics of the platform does not require speculation on our part.

incognitocrytpo
97 WLS
7 Shares10
Sign Up to join this conversation, or to start a topic of your own.
Your opinion is celebrated and welcomed, not banned or censored!