ammonitePosted for Everyone to comment on, 5 months ago8 min read

The patient was in a bad way. His neck was broken, his jaw would not close and the chomping action had stopped its glorious sound. My Five year old was upset and disappointed as he had only had this toy for less than a month of the Covid 19 lockdown. I was angry, such an expensive toy, saved up for with birthday present money and he was going the way of the dinosaurs. 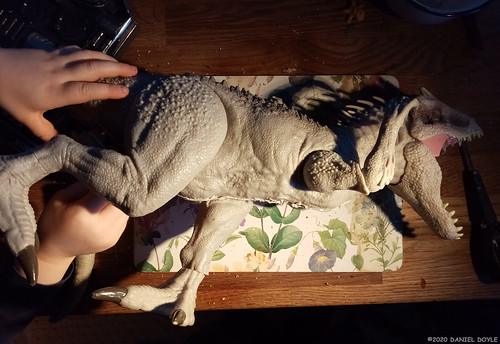 I usually don't do this sort of post but having searched online for repair videos I found none. Just a couple of people complaining about how their toys were also falling apart. So I thought I would have a try and see what I could do and maybe help others along the way.

The birth rite of repair

When I was young and one of my toys broke my father would always say 'Leave it on the Mantelpiece and I'll see what I can do.' Without fail, I would wake up the next morning to a fully functioning toy. I want to be that father to my son and teach him how to do these things for his children.

I loved Jurassic park when it came out and although my son is a bit young to watch the movies he is an avid palaeontologist. When he was three and a half he shouted 'Therizinosaurus' to a question asked by a professional palaeontologist we had gone to see in a talk. He was correct, that is the dinosaur with the biggest claws. He is dino obsessed and has dragged me into that world of the fascination for these amazing creatures.

I might as well start with a bit of a toy review, this is what most of the shills do on Youtube. This Indominus Rex is from Mattel and is part of their Dino rivals merchandise series for Jurassic World. It is nicely sculpted and does have some nice actions that it can do. One button on the tail operates the jaw and another on the back makes the claws grab. This is all accompanied by a sound from the movie itself. Inside the neck is a button which when he is eating makes a nice chomping sound. I like the way they use various plastics in the molding to give it different textures and functionality.
But, this is where our pleasure with the toy ends. I understand how important these Merchandises are to the franchise but the build quality leaves a lot to be desired. These are toys and toys are supposed to be played with. To have them break so easy is bad but what infuriates me the most is that they can not be fixed. The whole thing is glued together and when it does break, which it will, there is no way for the normal dad to easily share that fixing moment with their child without bringing out the big guns but damn this disposable world, I'm going in. 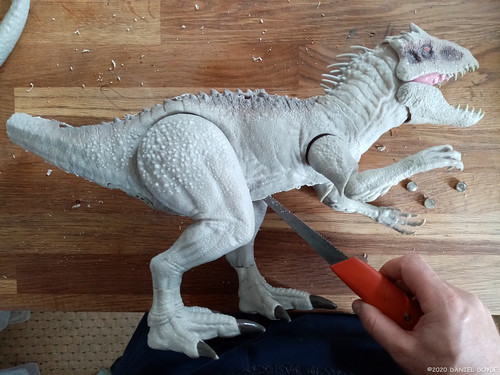 First I needed to saw the shell in half. Mattel had probably thought that glueing the sides together would be a good way of saving a few cents on screws or clips. Maybe they also worried that someone may copy their mechanism but, it really is so sad that they have given no thought to how it could be fixed if things went wrong. You really have to break it more to fix it. 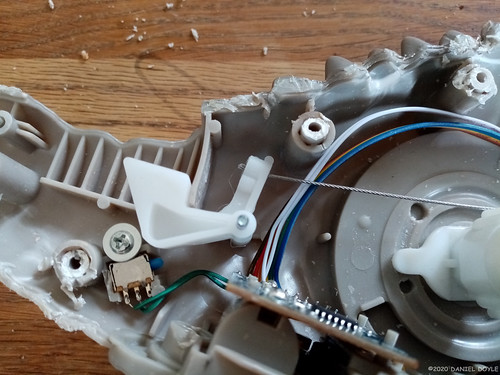 As well as sawing through the skin I also had to saw and break through the plastic location rivets. 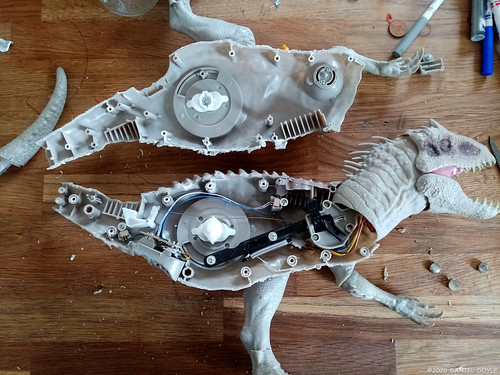 Finally, I'm in like Flynn. A big mess of a shell which will also Now need to be repaired. I will leave the head intact for now. 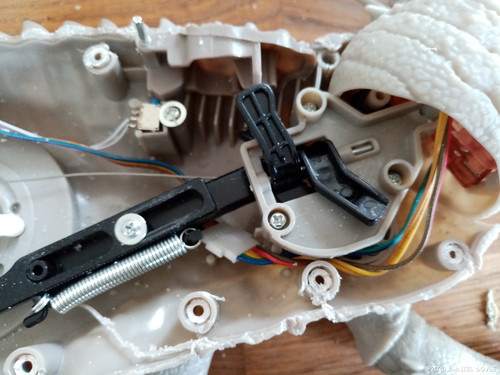 I will say at this point that I enjoyed trying to backwards engineer what the designers did and to be honest it all looks quite good on paper. Unfortunately, this wasn't paper and I could see that some of the materials were pretty weak. Especially the one which connected the head on, that grey bit of plastic at the centre With the black yokeme bobs going through it. The Yokemie bobs are the mechanism to operate the arms with a sort of scissors action and they are made from a much stronger plastic which I think should have been used on the neck as well. 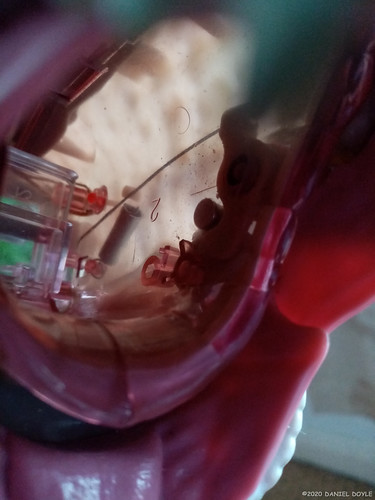 I had decided to fix the jaw mechanism first. This was the first thing to break after one or two days and through the mouth, I could clearly see what had happened. Through the plastic, I could see a spring had broken which was supposed to close the mouth. I had hoped that I might have been able to access it from the neck but of course no, everything was glued solid and it stood there looking at me so near yet so far away behind a wall of plastic. 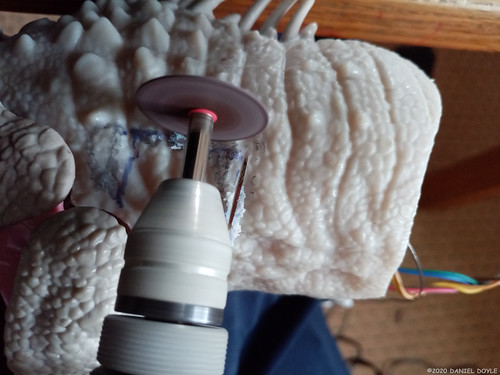 Instead of giving the whole thing open brain surgery, I decided to make a not-so-little incision in the neck and reattach the spring from there. I figured this would be much cleaner than having to completely saw apart the head. 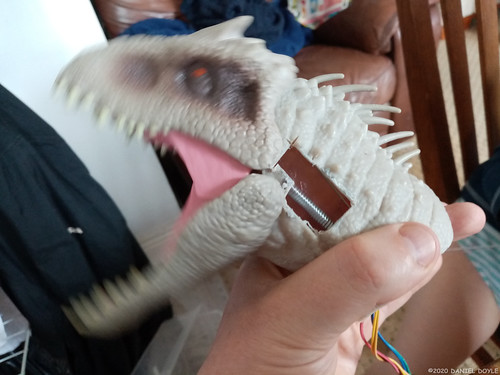 Creating a new loop and reattaching the spring back to the pivot point did the trick and had the added effect of making the biting action more vicious. 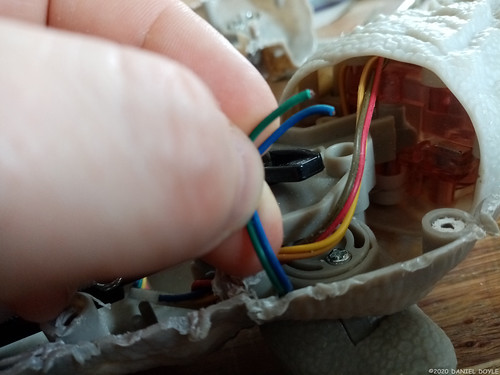 I discovered the Wires from the chomping switch in the neck were loose so that would need to be fixed next. 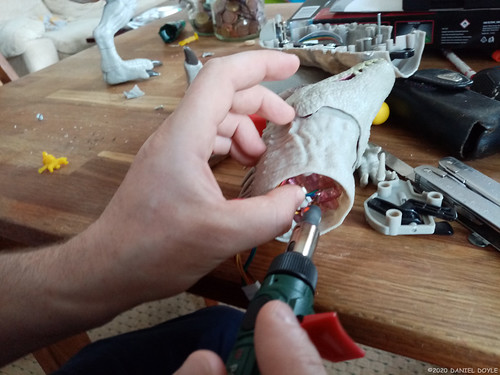 I re-soldered the wires. Not exactly rocket science but definitely fiddly to do without melting plastic or fingers. 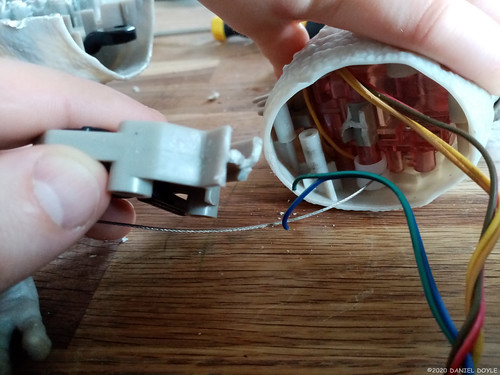 Here you can see the neck bone which should really be connected to the head bone. This plastic is quite strong but also quite brittle and I think the excessive head movement made it the weak point of the whole structure. 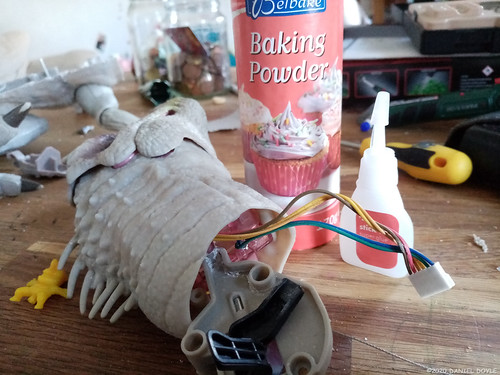 The next repair was to stick the neck bone back together. I really wasn't sure if I could get this to work and hold due to the very small contact area so I used baking powder and lashings and lashings of super glue. The powder when it comes in contact with the glue becomes as hard as a rock and also helps fill any gaps. I was actually surprised at how well it worked. 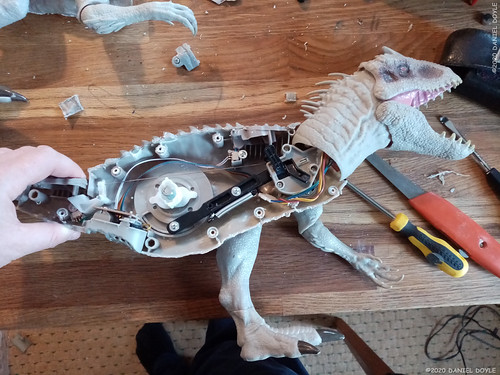 Taking things apart is one thing but putting them back together is another. Luckily I had taken some photos for this post so I was able to use them to guide me. I found a place for everything and did some tests. Everything was working like the toy God intended. 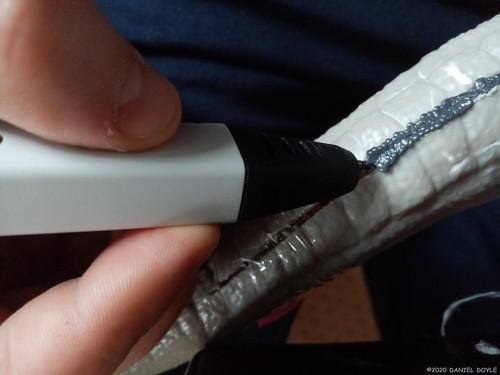 Now it was just a case of putting the shell back together. I used my 3D pen to give him stitches with PLA plastic. Unfortunately, I didn't have a great colour match. This is a great material made from plant starch, it melts at 180c but is super strong and biodegradable (supposedly). Maybe Mattel should think of using this material, I really wonder how many of these toys have made their way to landfill dumps to be discovered by palaeontologists of the future. 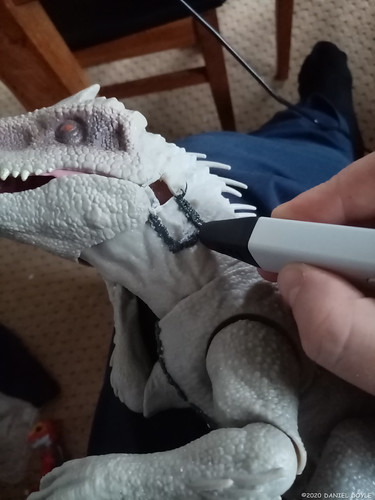 I also patched back in the hole I had made on his neck. With the PLA I'm sure I can access it again if and when the spring breaks again. Next time I may even replace it with one from my car's suspension. 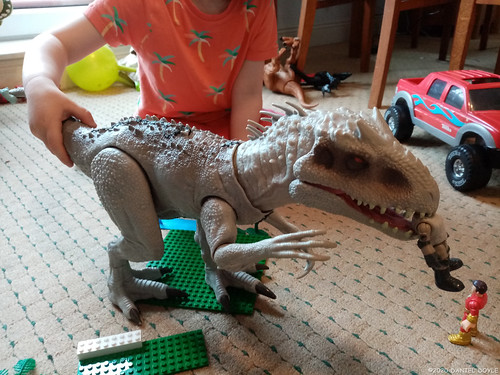 And there you have it, a repaired toy and a very happy little boy. He was very happy to have him back working again and also that he have a good part in helping with the repair. His small fingers are much better at getting into tight spots. It was also a great time to bond as father and son. 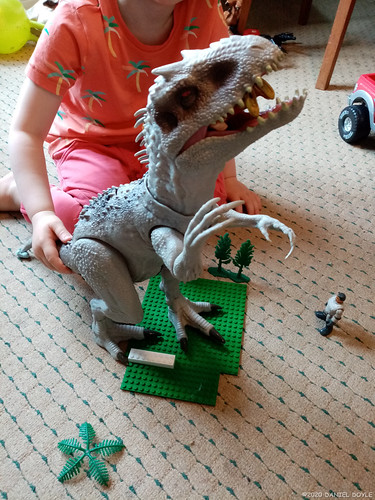 The chomping action is also working. That little poor soul going into his mouth will press it with his last breath.

So what have we learned from all this? Firstly toys are not made the way they used to be. They are disposable which I think is a big shame and indictment of the industry. Imagine if anytime you needed to fix your car you had to use a can opener to cut through the bonnet. It also blocks any avenue of father-son bonding which I'm sure many of those my age enjoyed. It is only with the sheer sense of madness and lots of tools that a father could hope to bring them back to life. Luckily my father passed the fixing bug onto me as I hope to do for my son.
The sense of pride in fixing something is underestimated by toy companies. It is a time of play that children and parents can enjoy together. I really wish they would think about what legacy they are leaving.

sciencediyrepairfamilytoys
241 WLS
10 Shares6
Sign Up to join this conversation, or to start a topic of your own.
Your opinion is celebrated and welcomed, not banned or censored!